The potentially hazardous Near Earth Asteroid 2018 AM12 was discovered  by the Pan-STARRS 1 Survey, Haleakala, on 2018-01-15 (MPEC 2018-B27). About 38 hours later I did follow-up observations and found out a short time fluctuation of the brightness. I have collected data over about two hours, which resulted to the lightcurve shown below. The object is an extremely fast rotator with a rotation period of roughly 12.5 minutes. This fast period is unusual for an object of this size, since it is known that almost all objects larger than ~200 m tend to have periods longer than 2 hours (the so-called spin barrier). For data reduction was used the Software Astrometrica, for period analisis Peranso.

Sequence of fotos, taken on 2018-01-16 at the 0.8-m Schmidt telescope, Calar Alto, Spain by Erwin Schwab. Timespan of the sequence is about 22 minutes, which is almost 2 rotation periods. The shown field of view is ~8×8 arcmin. Exposure time per single frame was 30s. 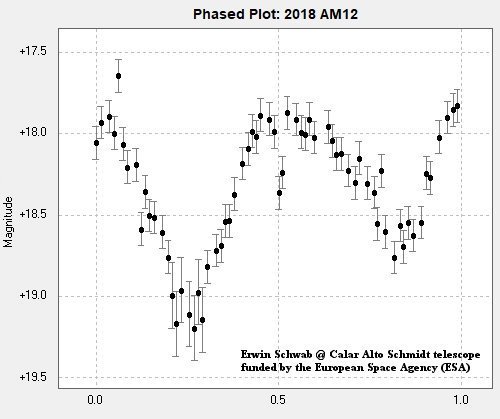