Discovery of the hazardous asteroid 2015 BK515 in collaboration with ESA

Detlef Koschny, head of ESA’s Near Earth Objects Segment in the Space Situational Awareness (SSA) programme, determined Erwin Schwab to plan and analyze the searching for lost hazardous asteroids. His scheduled target was the Near Earth Object (NEO) 2013 GD34, which Schwab could find 0.4° away (about the apparent size of the Moon) from the predicted position. After this successful recovery by releasing a Minor Planet Electronic Circular announcing the new observations, Schwab checked the picture for unknown objects using the software Astrometrica. Very close to the edge of the field he found an unidentifiable fast moving object and submitted the position measurements to the US-based Minor Planet Center, which collect all asteroid measurements from observers worldwide.

When the discovered asteroid belongs with high probability to the class of Near Earth Objects, follow-up observations must be done extremely fast to ensure it is not subsequently lost. Therefore the Minor Planet Center had listed this new NEO candidate immediately as Schw684 (the discoverer’s reported designation) onto the Near Earth Objects Confirmation webpage to inform other Observatories as quickly as possible. But the high star density in the area of the new object made follow-up observations very difficult.

Fortunately a week after discovery the confirmation succeed by Stephan Hellmich and Stefano Mottola using the 1.2m reflector at the Calar Alto Observatory in Spain. On 2015 February 7. the discovery was published in the Minor Planet Electronic Circular and the result of orbit determination showed that 2015 BK515 is a hazardous Asteroid, which can approach the Earth closer than about 7 million km.

Table of the next close approaches, brighter 22. magnitude, calculated with FINDORB after 24-day-arc elements:

Ephemeris uncertainty after 24-day-arc elements, generated with service of  NEODyS:

Ephemeris uncertainty after 94-day-arc elements, generated with service of  NEODyS: 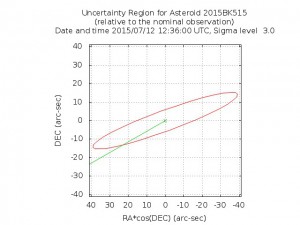 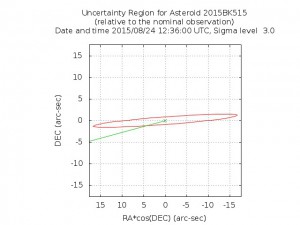 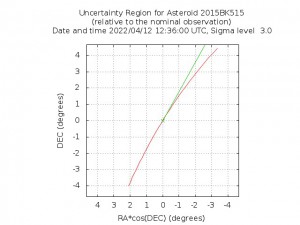 Ephemeris uncertainty after 145-day-arc elements, generated with service of  NEODyS: 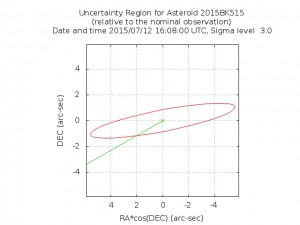 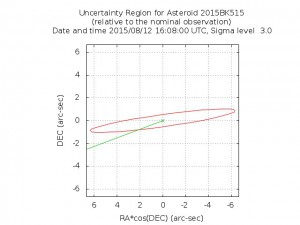 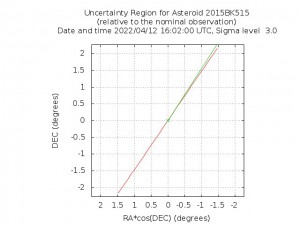