As part of the Space Situational Awareness Program of the European Space Agency (ESA), Erwin Schwab, Amateur Astronomer and volunteer Observer of ESA, was searching for the lost comet P/2012 K3 (Gibbs) using the 0.8m Schmidt telescope at Calar Alto, Spain. In the night from 2019 July 26th to 27th, he took pictures from the predicted area in the constellation Sagittarius. The comet could not be found. But during the analysis Schwab noticed a star, which suddenly disappeared from one picture to the next. After further obserations, he found out that it is an unknown cataclysmic variable star, probably of the very rare DQ Herculis type. This is a binary star system, also called indermediate polars, consisting of a white dwarf primary star and a red dwarf secondary star. The red dwarf has filled its Roche lobe and matter is being drawn off, onto the surface of the white dwarf star. Seen from the earth, the brighter white dwarf star is periodically obscured by the darker red dwarf, which explains the apparent disappearance.

The animated discovery images of the variable star in the night from 26. to 27. June 2019, consisting of 13 pictures with one minute exposure each. The shown field is a small cutout of the total FOV. The variable star (in the middle) becomes invisible from one exposure to the next.

The new variable star was reported to the American Association of Variable Star Observers (AAVSO) [1] and got the Unique Idetifier 000-BNG-512 in the International Variable Star Index (VSX) [2]. Schwab was registered as discoverer together with the PanSTARRS team, who has also independently noticed the variability with an automatic survey. But the PanSTARRS team had classified the object incorrectly as RR Lyr star and determined a wrong period [3], as it turned out.

To cover the timespan while it is daylight in Spain, Paul Breitenstein provided additional observations using remote controlled telescopes in Australia and Hawaii. The orbital period of 8.87 hours could be determined, which is a long-period for this type of variable star. Furthermore, it could be proved a sinusoidal secondary period of about 1 hour with unusually high amplitude, which is most likely the spin period of the white dwarf. Both periods were published by Schwab and Breitenstein 2019 in the BAV-Rundbrief, a german newsletter of variable star observers [4]. For this work they received the Astronomy Award 2020 from the Physical Society at Frankfurt am Main, Germany.

Breitenstein and Schwab observed the object continuously in the following 2 years (2020 and 2021) in order to determine the spectral class of the red dwarf star and the periods more precisely. Together with Klaus Beuermann, an expert for indermediate polars working at the University of Göttingen (Germany), further important physical parameters were determined, such as star masses and diameters, temperatures, luminosities, orbit inclination, spectral class and magnetic forces. Furthermore an oscillation of the eclipse ingress and egress times were observed, which indicates that the source of the main emission orbits around the white dwarf star. This work is pending for publication in the scientific journal Astronomy & Astrophysics [5]. 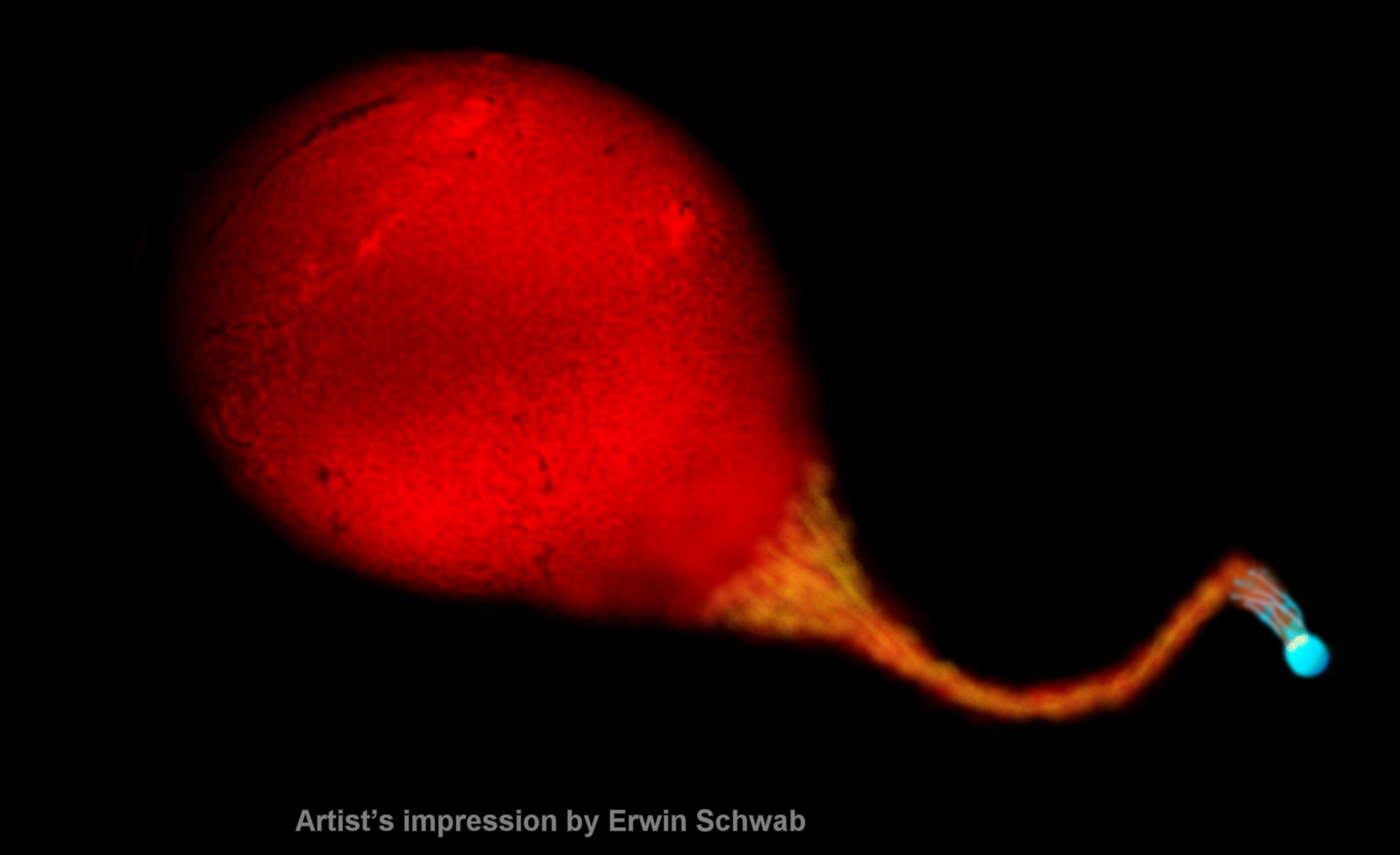 Artist’s impression of the binary star system 000-BNG-512, which is most likely a diskless Intermediate Polar. The white dwarf is roughly earth’s size and the red dwarf about half of the sun. The distance from each other is small, about the diameter of the sun and matter flows to the magnetic poles of the white dwarf star.

Typical for this type of variable star is that the flow of matter first hits an accretion disk before reaching the surface of the white dwarf star. But in that case there is no evidence for the presence of an accretion disk, which should be visible in the light curve. Most likely it is an diskless accretor, were the matter flows directly to the magnetic poles of the white dwarf star (see artist’s impression). The only other serious contender among indermediate polars for the so far small group of diskless accretors is V2400 Oph. But V2400 Oph has the disatvantage that the eclipse can not be seen from earth, because of unfavorable orbit inclination. Beuermann, Breitenstein and Schwab come to the conclusion in their publication, that „there exists presently no similar object and its eclipsing nature emphasizes the potential it carries for studies of its evolutionary status and further evolution“. 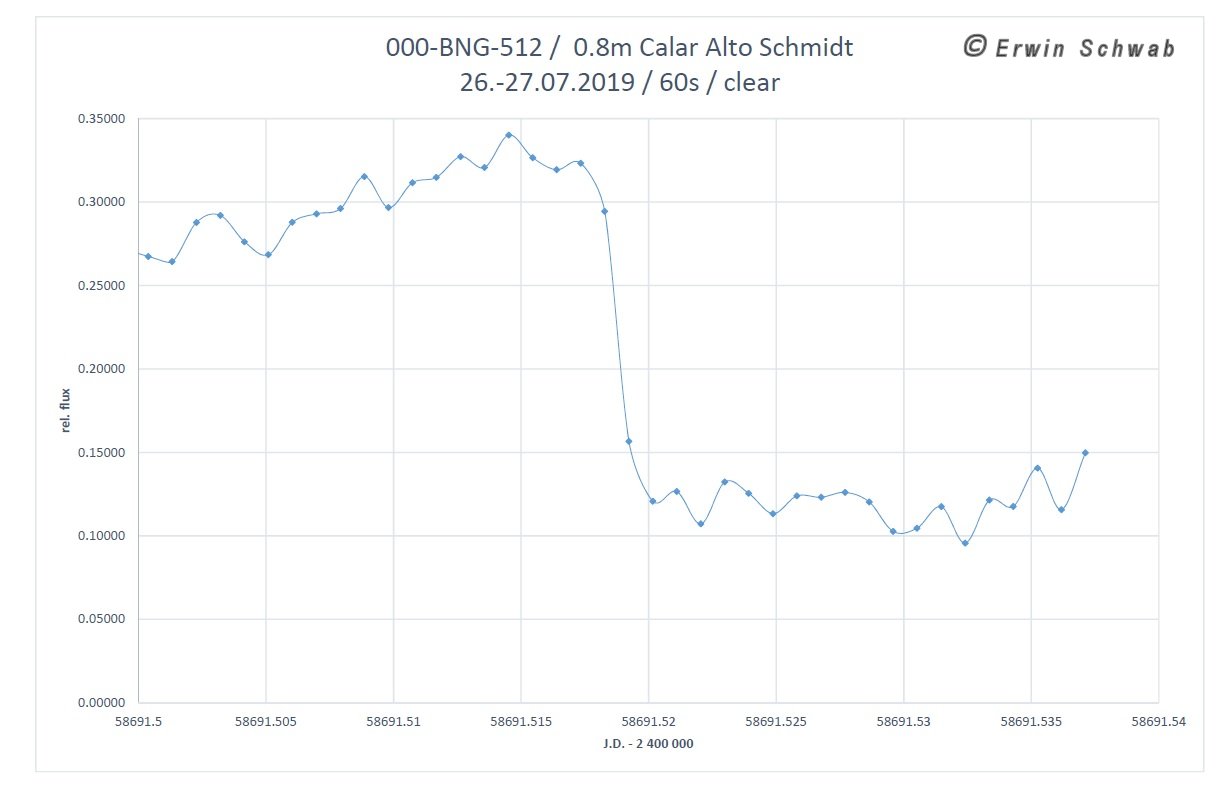