Asteroid or minor planet 283142 Weena was named for the major female fictional character in „The Time Machine“, a novel by H. G. Wells. The role of Weena in the 1960 filmed version was played by the actress Yvette Mimieux.

The space rock, about 2.5 Km in size, circles the Sun every four years between the paths of Mars and Jupiter. It was discovered by the German amateur astronomers Erwin Schwab and Rainer Kling on 29 December 2008. They detected the minor planet from the Taunus Observatory, located in the Taunus mountain range close to Frankfurt am Main (Germany), using a telescope with 0.6 meter diameter.

The Observatory is operated by the Physikalischer Verein Frankfurt, which is one of Germany’s oldest associations, founded in 1824. Regarding to the discovery rate of minor planets, it is one of the most successful observatories in Germany .

Animation of Discovery images from 29.12.2008
credit: E. Schwab / R. Kling
Detail of 10×10 arc minutes, unedited original size of field is 60×45 arc minutes. Weena is the moving point-shaped object. The integrated exposure time of each frame of the movie is 18 minutes. 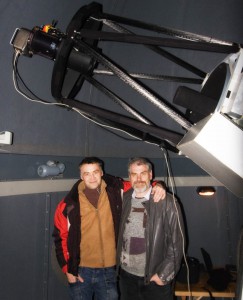 Animation of images from 12.11.2012 taken at the Optical Ground Station of the European Space Agency (ESA OGS) in Tenerife, Spain.
credit: ESA / E. Schwab
Detail of 5×3 arc minutes, unedited original size of field is 47×47 arc minutes. Weena is the moving object in the center. The integrated exposure time of each frame of the movie is 3 minutes.